It depends on your requirements as different types of application are used in different ways. A purely advertising system is used very differently to a more general information system.

A requirement of a general information system might be to always show the date and time somewhere on the screen along with corporate branding and maybe a news feed.

If you only have a single zone screen, you would have to add those items to every slide you create .

If you have a multizone screen you can set aside some of the zones to only show those items and basically forget about them so your main slides just carry the information you want to show.

If for example you later wanted to alter your clock colours or design you would only need to alter the slide that has the clock in it rather than every single slide you’ve previously added the clock to.

The image below of a six zone screen shows an example of this. The large zone is the primary content channel that you update regularly, while the smaller zones along the top and down one side show information that’s relatively static or auto updating. 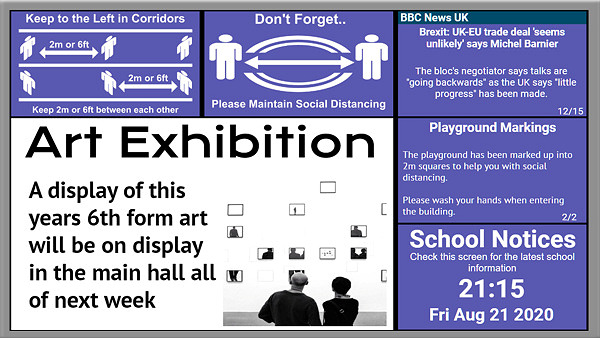 The system supports many different zone layouts so the above layout is one of many.