There can’t be many places that don’t have a noticeboard. Every factory, office, staff room, cafe etc usually has at least one of them.

Noticeboards are great, they show lots of information all at the same time

The majority of digital signage is used to show full screen ads or messages. This works perfectly well for most applications, especially if the screen is some distance away from the audience.

We also like the traditional noticeboard approach where you can show lots of different information on a screen all at the same time as it makes for a more useful screen.

This is where our multizone displays play a part. The screen can be split up into multiple display areas that we call zones. Each zone on the screen is in effect an individual signage system so can display carousels of pages.

Deciding what content to put into each zone can be time consuming and isn’t something people want to have to think about. By putting all the zones on a screen into the same display channel a multizone screen can be treated as a single screen.

No need to make an individual page for each message

Notices can very quickly be entered into the system via a simple form. These will then be inserted into a template previously designed with the editor as in the image below. The notice will be added to the screen automatically.

Messages can be edited, deleted and set to be published or hidden. 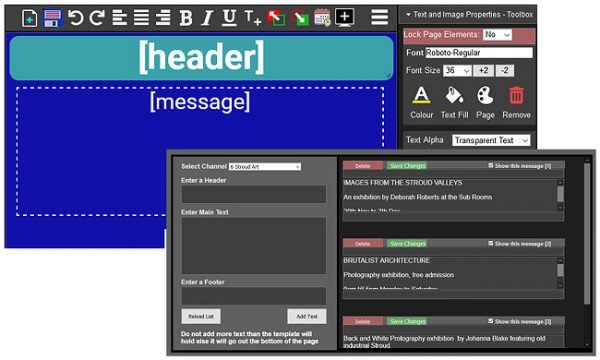 Use digital signage on your desk at work or at home

Lots of people are now working from home. As our signage player is basically a web browser connected to a website you can easily use the system at home. Something like a 10″ tablet makes a great device for home signage and is small enough to be used on your desk.