How the signage system works

Think of digital signage displays as operating in TV channels. Each signage channel contains different content that individual screens are tuned into.

The content (pages / slides) are created in the system editor that can use media such as photos that you have uploaded.

You then put the slides you want displayed into the channel your screens are operating in. If you add multiple slides into a channel the system will show them one after the other. After its shown the last slide it jumps back to the first one and the process repeats.

You can define how long each slide is on display and you can add or remove slides at any time. This is known as a carousel or playlist.

Slides can also be scheduled.

To save you having to make a new slide each time you can make a special type of slide called an active template. This has text placeholders in it that get populated from text pulled out of the systems database.

The text in this mode is entered into the system in the same way you would add a post to a forum or social media. Each message or post is then put into the template and displayed on the screens, one after the other.

This method of page creation is an incredibly quick way to add content. All the slides will have the appearance of the template so they maintain a consistent appearance. Messages can be edited, deleted and set to be displayed or not displayed.

Your screens can all be tuned into the same channel(s), and show the same content as each other or be put into different channels and show different content in the same way that TV works. The screen is driven by a small device called a signage player.

Screens can be split up into different channels as in the info graphic below. This allows certain information such as a header to be on display all the time without having to add it to your main slides. 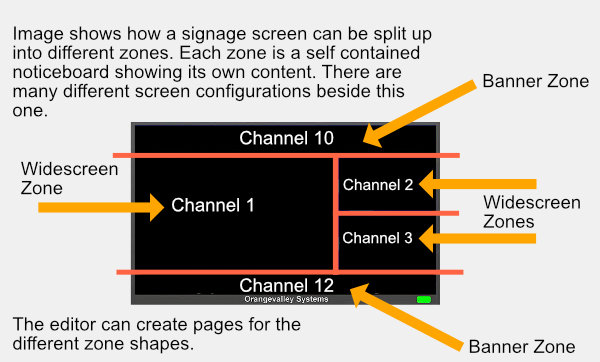 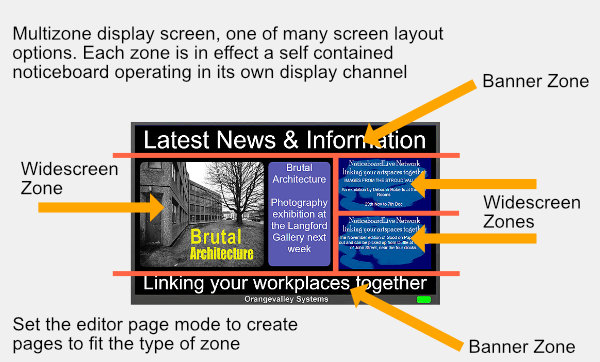 NoticeboardLive allows you to quickly send slides for display to any of the channels your screens are operating in.

Just configure the screen to operate in the channel you want, then from the controller drop the pages you want to display into the channels you are using. Channels can be given a friendly name, such as Reception Room to help you identify which screen you’re sending slides to. 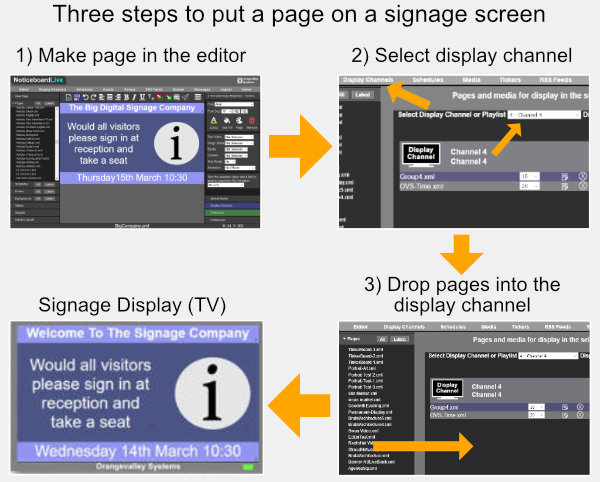 An added feature of the system is if you put multiple zones on a screen into the same channel, pages put into that channel will be distributed across the zones. This allows you to forget about zones and treat the screen as operating in a single channel.

An example being you have a screen split into four zones and you have a list of four pages to display. If all the four zones are in the same channel the system will distribute the four slides across the four zones so they are all on display at the same time. If you had eight slides, each zone would show a carousel of two slides.

Content will scale up or down automatically to fit different size zones. The content in the large and small zones in the image below are from the editor set to the same settings.

How are the Screens updated?

The screens connect to a small device called a player. The players ‘check in’ with the cloud server once a minute to look for any updates. If anything has changed the player updates the screen with the latest content.

Players are anything that runs a web browser, so you could use a Windows PC, a Raspberry Pi or an Android device plus a few others. Typically they’re small low power devices that can be attached to the back of the display screen.

Network traffic is kept to a minimum by storing (caching) all the pages for display in memory or local storage so if the network becomes disconnected the display screens will carry on showing what they were showing before, although they won’t be updated with new content until the connection is restored.

You are in Signage System overview