Should you run your screens in portrait or landscape orientation?

How big the actual screen is will also be part of the decision process as a huge portrait screen is going to be quite wide.

Displays that show simple ‘lists’ such as a menu or travel times tend to look better on a portrait screen as you can display a longer list simply because the screen is longer.

Text in narrow columns is generally easier to read, which is why newspapers use columns, books are narrow, and most websites are limited in width.

As rule of thumb, a line of text should be limited to between 12 and 15 words.

It’s worth looking at how information is displayed on posters or on things such as conventional noticeboards. They are almost always in a portrait format, although a portrait TV screen in terms of its aspect ratio is actually narrower than standard  paper sizes.

The noticeboard itself though is usually landscape shaped, with multiple notices pinned to it. As our screens can be split up into zones or areas it’s easy to replicate the traditional noticeboard look.

The image below shows how the same type of slide design looks on both types of screen. The one on the left has an obvious top to bottom text flow where the one of the right could be seen as a downwards zig zag or two independent columns. 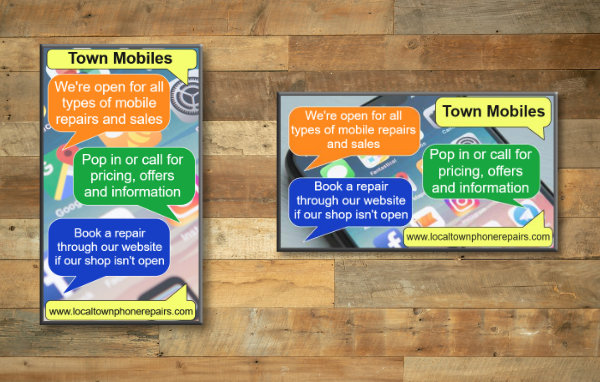 If you have multiple screens and want the same content on all the screens then ideally they should all be mounted in the same orientation, otherwise you will have to create content for the two different orientations.

A large screen mounted in conventional landscape orientation might not be that good a fit if it’s mounted low down on something like a support column as it could protrude either side of the column and be a hazard to people or when you move things like stock around.

In that case a screen mounted in portrait orientation would be a better option.

Putting a large landscape screen in a shop window could block off a lot of the more useful parts of the window.

If you’re mounting it on a wall then it doesn’t really make much difference which orientation you decide to use.

As as footnote, with our system a screen mounted in portrait orientation can be split into three different zones (top, middle and bottom), and each zone will have the same aspect ratio of a landscape screen.