DCS is a feature to automatically distribute a carousel of pages across a multizone signage screen.

If you for example put four zones onto a screen and set each zone to operate in the same channel, all the pages in the carousel will be automatically distributed across the four screen zones.

Why this is good

The great thing with multizone signage screens is that they can display lots of different information all at the same time, just like you can with a conventional noticeboard.

The downside is working out where on the screen to put your content, so this does the working out for you.

A real world example of this would be an estate agents window where they show as many houses for sale as possible.

People can find the property they’re after pretty much instantly as lots are on display all at the same time. Conventional digital signage operates on a page by page basis so isn’t as effective.

What this means with digital signage

Take a screen split up into ten zones as in the image below. This example screen shows holiday offers pulled out of the systems quick message database but it could be anything. 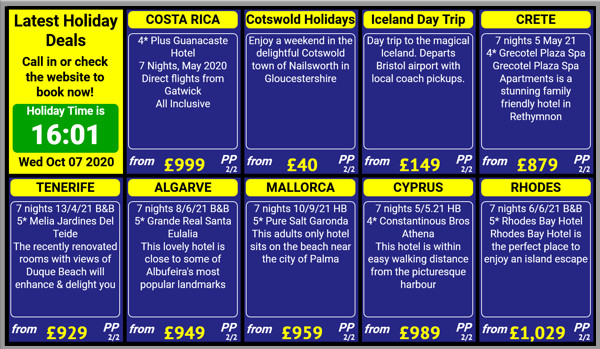 The top left zone is configured as a normal zone that you have full control over, so you can use it for general advertising.

The rest of the screen is configured with nine DCS zones hooked into a template which determines how they look.

If you entered nine different holiday offers into the system, each offer would be displayed at the same time in each of the nine DCS zones.

This example allows you to show many holiday offers on a screen all at the same time without you having to decide where to display them, as the system works that out automatically.

Adding or removing messages will update the screens automatically. The image below shows the list of messages in the controllers quick message system that get displayed on the screens. You can edit and delete them along with enabling them for display or not. 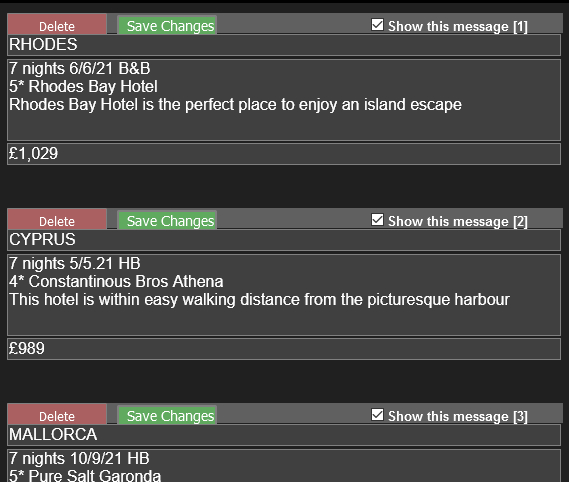 If there are less messages than display zones, the system can be configured to switch zones without content to a different display channel so could show default advertising until content is available.

While the above shows this working with the systems quick messages feature it also works with normal carousels and playlists.