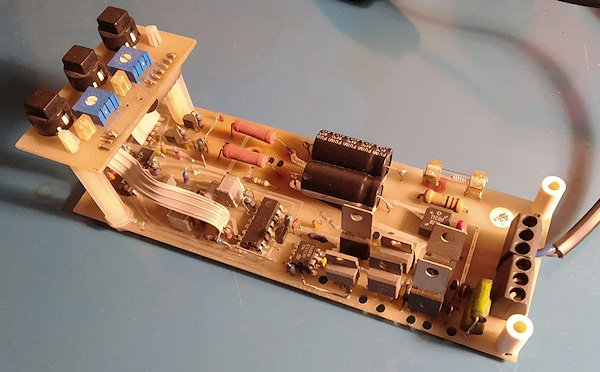 This is an interesting board, the turntable motor controller for a Logic DM101 record deck from the 80s.

They also get used to drive the turntable in record decks for the same reason.

This board wasn’t working and had a strong smell of burning.

Unlike most modern electronics this board is powered directly from the mains rather than from a low voltage transformer so it’s a bit dangerous to work on. The smell of burning was due to too much current going through a big dropper resistor. 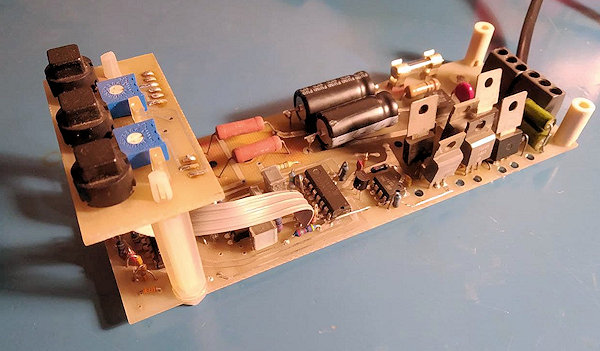 Ultimately the mains voltage ends up as +/-15v to power the ICs on the board via two dropper resistors and zener diodes. A failed 741 op amp was dragging the +15v side of the power supply down to about 9v causing one of the dropper resistors to get extremely hot, and thus smell of burning. The board also had a failed transistor.

There’s a multitude of reasons why this board might not work, but if you have a faulty one you should get about 150vdc across each of the two large capacitors near the fuse and +/-15vdc on the ends of the two big red high wattage resistors near the switches when running from 230vac in the UK.

If the voltage across each capacitor isn’t the same you’ve probably got a problem.

If have one of these or something similar that you want repaired please contact me.

Warning: This board is powered directly from the mains supply and the power supply on the board is unconventional. You could get a lethal shock when working on it even after the mains supply has been removed. If you don’t know what you’re doing don’t attempt to repair it.