An X2 capacitor fitted across the mains input in this valve Aphex 207D microphone preamp had failed creating a very smelly mess on the PCB. There were two X2-capacitors across the mains in this design separated by a coil. Both were replaced although it looked like only one had failed.

I’ve no idea how old this unit is but the manual is dated 2005 so its lasted well.

The muck on the PCB was removed before fitting the new capacitors, if for no other reason than it stank but it should be done as a matter of course.

Warning – Be very careful working on switch mode power supplies as you can get a very nasty shock from them even after the mains has been removed. A high dc voltage is usually stored in a big 400v (ish) capacitor. 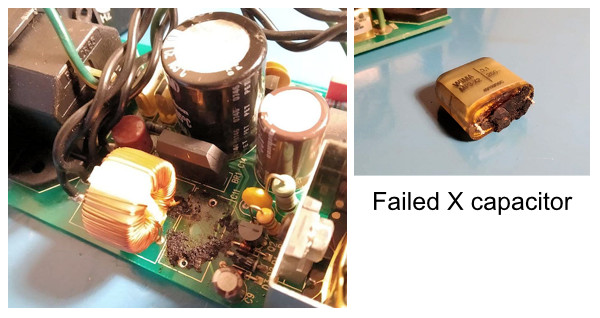 X2 capacitors are often found on the mains input to devices like switch mode power supplies to prevent any electrical noise from it getting onto the mains supply. They are designed to fail by going short circuit that should then blow a fuse, ideally.

I’ve noticed HiFi designs with valves appearing quite a lot recently, although they’re usually used in the preamp stages rather than the main output. Presumably that’s to avoid having to use a big expensive output transformer if they were used on the speaker output.

I’ve never seen one fitted into a 1U chassis like this though, that’s cool! 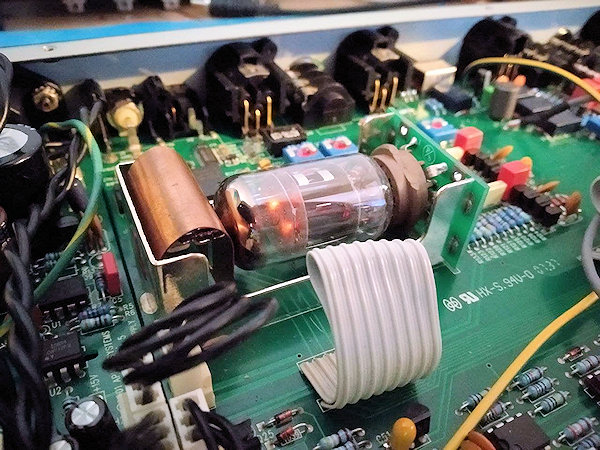 I’ve made a short YouTube video showing the power supply and a video that takes a look around the unit. If you have a faulty unit we may be able to fix it for you.

Balanced inputs and outputs give better immunity to electrical interference. Digital outputs allow easy linking to other digital audio equipment so everything can operate in the digital domain.

With a balanced audio signal you pass the signal through two conductors where one of the signals is 180 degrees out of phase with the other signal. The receiving electronics extracts the signal from the difference between the two.

This means if anything like nasty electrical interference spikes get onto both conductors the receiver will ignore it as it’s the same on both.