The backlights on a CB500F speedo had stopped working 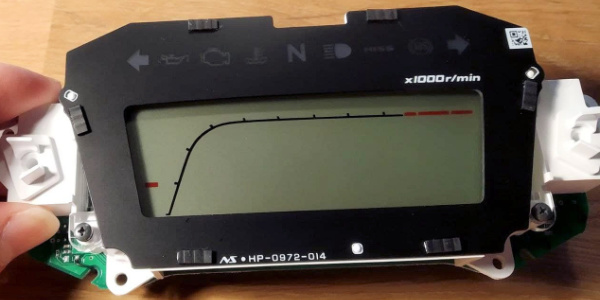 The PCB had suffered some water damage in two places that had eaten away some tracking along with the plating in a PCB ‘via’.

Vias connect tracks from one side of a PCB to tracks on the other (or to inner layers) through tiny plated holes.

The actual backlight LEDs were tested with a multimeter and proved to be working.

A couple of bits of wire were added to bypass the damaged tracks, which fixed the problem. It looked like the tracks carried power and a signal to switch a transistor on.

This wasn’t as easy a fix as it could have been as there was a large piece of white plastic on the top side of the PCB hiding the tracks I needed to get to.

The plastic holds the LCD and removing it might have damaged it so it took a bit of working out where to fit the repair wires.