The typical Onkyo (well most amplifiers) fault. The amplifier switches into standby or protect mode after a couple of seconds.

I picked this up on eBay to use as a source of spares but figured I might as well see if it was repairable first.

Amplifiers switching into standby or protect is usually caused by something triggering the protection circuits. More often than not something in the main amplifier output stage has failed such as a power transistor going short which puts DC on a speaker output.

In this instance three transistors had failed on the centre channel, one of which is one of the main output transistors. Presumably one failed and took the other two with it.

There are a lot of boards in these things, but it’s possible to get all the main boards out without taking everything apart which saves you breaking connectors and refitting cables the wrong way around. 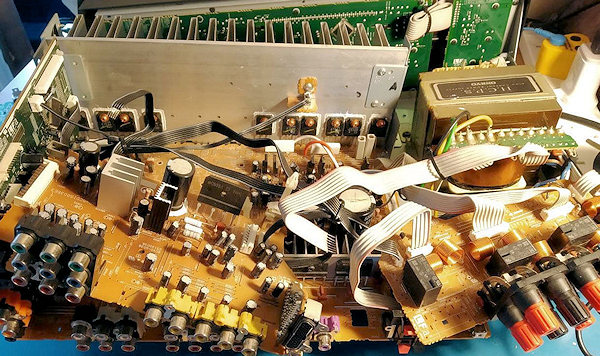 Before fitting the new parts I checked all the other transistors on the centre channel that drive the main output ones.

On power up it promptly destroyed both the centre channel output transistors where only one had failed before!

These are complex amplifiers and high voltages and currents are at play so I’m not entirely surprised it failed again. There’s also a lot of fake power transistors on the Internet and I suspect I fitted a fake.

This would be a good excuse to fit a modern TDA7293 based 100w amplifier board as shown below in place of the failed channel.

Home theater amplifiers have at least 7 individual power amplifiers in them and a failure in any of them will shut the amplifier down. A lot of the transistors in older units are obsolete making them difficult to source although most transistors have modern day equivalents.

These TDA7293 boards cost about £5. The three failed transistors this amp needed cost more than double that. 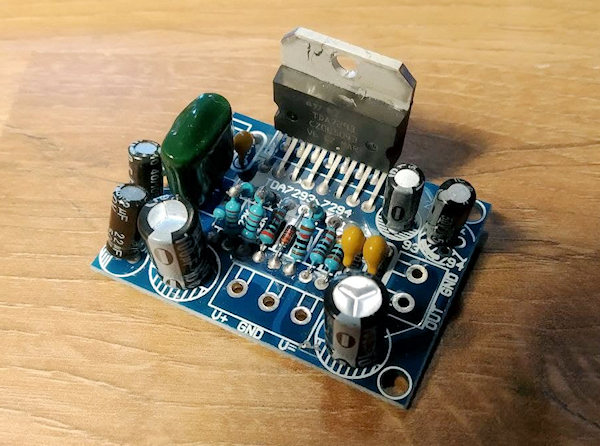 Obviously fitting it into an existing design isn’t that simple as the power supplies in big amplifiers are often in excess of what the TDA7293 can handle plus you have to attach it to the existing heatsink with an insulating pad as the metal tab is connected to -VCC.

A bit of work, but cheaper than buying a new receiver.

A friendly warning, if you know nothing about electronics don’t attempt a repair. These have high voltage and high current power supplies in them that could do a lot of damage or give you a nasty shock.