I came across this crowdfunding project for a six zone audio amplifier that has  both streaming and analogue audio inputs based on a Raspberry Pi Compute Module 3+. Any input can be routed to any output. 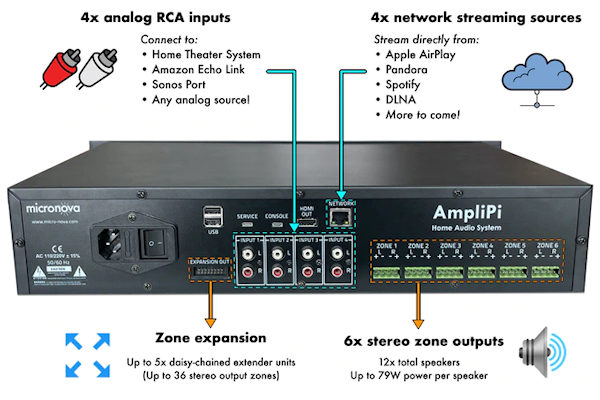 The compute module is a cut down (cheaper) Pi without any of the connectors so it fits into a carrier board. It comes with an SD card holder but software can be put into an eMMC instead. The compute module finds uses in things like smart televisions used for some signage applications.

In this case it’s used to control an audio amplifier that has six class D audio outputs, four streaming audio inputs and another four conventional audio inputs. Class D amplifiers run a lot cooler than more conventional amplifiers so can have much smaller heatsinks for a given output.

It can play four simultaneous audio streams or use the four conventional RCA audio inputs.

Audio from any input can be routed to any or all of the outputs. The unit is controlled via a web interface or REST API. 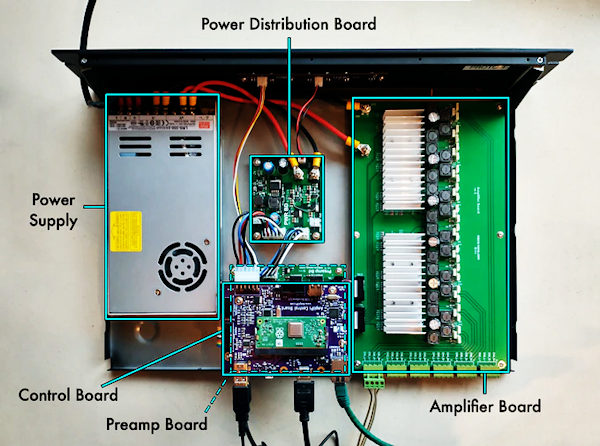 They market it as a whole house audio system, but its probably got other potential uses such as in retail. It could for example be part of a signage system.

I used to test and repair a six zone audio amplifier that wasn’t a million miles away from this design as it could be controlled via a web interface and an RS232 port. It used a six channel class D amplifier chip that was designed for home cinema systems rather than individual stereo devices.

The amplifier I worked on found uses in betting shops as all aspects of it could be controlled from the main head office control room.

Both the software and hardware design of the AmpliPi is open source should you wish to build your own.

The AmpliPi Kickstarter Project Opens in a new tab.