I picked up an old Onkyo HT-R380 amplifier that was stuck in standby / protect mode so pulled it apart to find out what the problem was.

This is a typical fault condition with a lot of old amplifiers as something fails and triggers one of many protection circuits that switch the unit off. 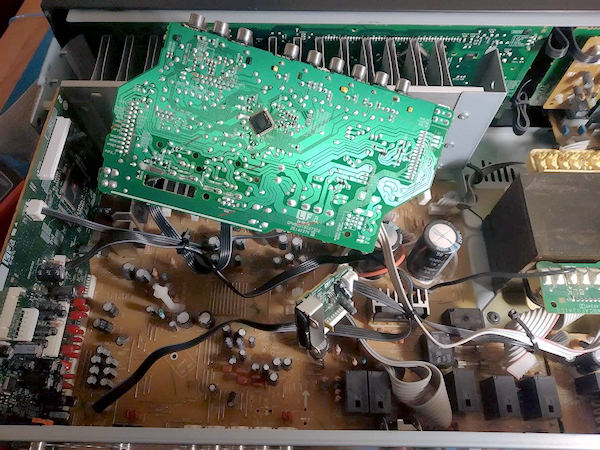 If you’re fixing one of these yourself it won’t work with the back panel removed as it forms a ground connection between the standby board and the main board.

I’ve produced a YouTube video that takes you through how this Onkyo powers up and what causes it to switch into protect or standby mode.

I tracked the fault down to a Sanyo STK module that’s obsolete. I brought a presumably cloned one from China and it was more faulty then the original faulty one! Failure of the STK module is fairly major as it has three power amplifiers in it and it only needs one of the three to fail to shut the receiver down.

Assuming it’s a failed output transistor in the module you could in theory isolate the faulty part of the module by removing the appropriate big white centre tapped power resistor. You’d need to remove it from the board to prevent any current flowing from the failed power transistor and check the module isn’t overheating.

I’ve not tried these suggestions, it’s something you’d do at your own risk. It would be better to try and get a replacement STK module from a scrap unit. If you don’t know what you’re doing don’t even consider it.

Note: There’s a very high current +/- 50v on the circuit board and live mains on things like the transformer terminals. I sent myself flying across a room once by accidentally resting my arm on a live connection on a transformer. You could do a lot of damage to yourself or the amplifier if you don’t know what you’re doing.