ASUS have announced the release of a new Tinker Board, the Tinker Board 2. This board uses the faster Rockchip RK3399 which is an improvement over the original processor. 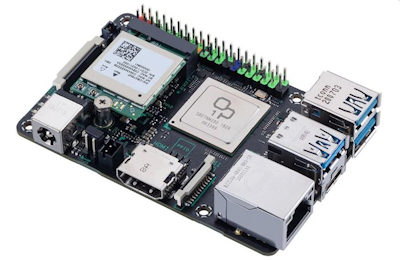 This new board also supports two 4K screens which makes it more competitive with the Raspberry Pi 4.

The board has been engineered to run Android 10 which has interesting features such as  version 1.2 of Android Neural Networks API (NNAPI).

No prices are available yet and there’s nothing on the ASUS UK website about the board which figures as it’s not due to be available until the first part of 2021 which apparently is when ASUS plan to deliver Android 10 for the board.

The last time I looked at the current board I couldn’t find any Linux distributions that fully supported hardware acceleration.

Android worked better on it but it didn’t work any better than other cheaper Android options although Android 10 has better IoT options that would be useful.

Ultimately a Raspberry Pi 4 running Raspbian was the better option for signage simply because it was cheaper and easier to flip the screen into portrait orientation.

All these small single board computers start to get expensive once you’ve had to buy heatsinks, a case, SD card and PSU so unless you need it to be really small, don’t want Windows or require the I/O, beyond a certain point you may as well use a small Windows 10 NetTop PC as they don’t cost much more and usually have far better performance.