The Raspberry Pi can be used with our digital signage system. As our signage player is a web browser all you need to do is configure a web browser such as Chrome to connect to our cloud URL and start it up in full screen kiosk mode.

For this reason you can use pretty much any hardware that supports a modern web browser.

Using the Raspberry Pi is not without its issues though, you might get a Chrome popup telling you to update the browser every now and again. You also need to ensure any drivers are installed to be able to make use of any hardware acceleration otherwise everything will run too slowly.

The only way we found to make it work reliably was to build an Electron app as that bundles a Chrome browser that won’t be effected by system or browser updates. It also won’t display popups telling you to update it, so it should always work.

Changing the TV you connect it to might require you to go digging around the system settings changing the refresh rate etc to get it working with a different TV.

Once you get it all working it’s a good solution but if you’re not a Linux expert there’s easier options such as a Windows 10 net top PC. By the time you’ve brought a case, PSU and SD card for the Pi it’s quite expensive.

If you want to use it for showing videos all day you should aim to use something with more power.

Some Video Tests we did with the Raspberry Pi

One of our tests is a screen running at 1080 x 1920 portrait orientation with three separate signage zones on it, a couple of which are running a lot of JavaScript animation and video.

Bear in mind that this is video running in a browser.

In a comparison between the Pi3B and the Pi4B there is quite noticeable difference with the onscreen animation speeds. The Pi4 has a faster CPU and different hardware architecture and it shows.

Playing video was an interesting test. The Pi4 leaves the Pi3B for dust! 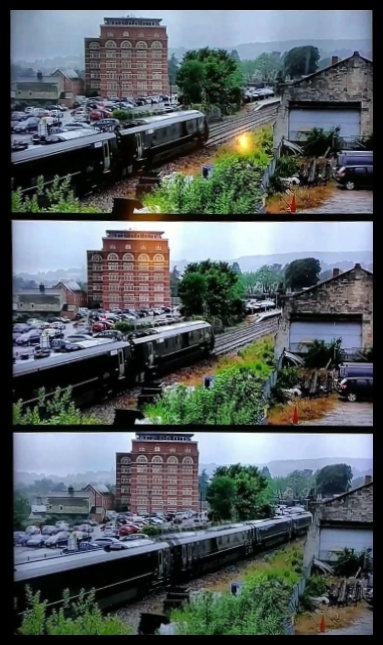 The photo shows a simple video test. Three videos made at the same 1280 x 720 resolution at 16mb/s bit rate can just about be played by the Pi4. The display was running in portrait orientation at 1080 x 1920. The operating system was the official Pi Raspbian. With something like the Raspberry Pi you should use an operating system designed for it as it will ideally use the onboard hardware acceleration.

In the video test frames are dropped but it’s not too bad. The videos are played in a web browser using the HTML5 video tag. The same video created at 720 x 1280 portrait orientation played full screen (1080 x 1920) without any problems.

A video created at full 1080 x 1920 resolution with a higher bit rate probably wouldn’t play as well, we didn’t test that as that’s not a typical end case for this type of signage hardware.

The same test in the Pi3B (older 1.2GHz CPU) failed to play the videos.

To put this into some other perspective, a Windows 10 Net-Top PC with a dual core Intel Atom running at 1.4GHz played all three videos without any problems at all. It appeared to download the videos quicker too. The Windows NetTop is a very small air cooled PC about 10cm square and is sub £150.

So, can the Raspberry Pi be used for digital signage?

You are in the Blogs section