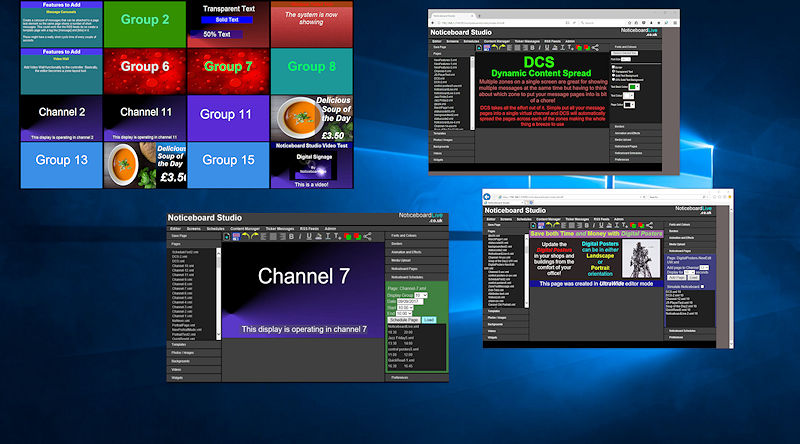 The above image shows how much more you can display on a 4k screen.  In the top left is a digital signage player running at 1920 x 1080 while at the same time showing three browsers running the signage control system.

Before 4k screens came about the digital signage player in the top left part of the screen would have completely filled a Full HD screen so you can see it’s possible to display far more information on the 4k screen.

4k TV is a hot buzz word these days but what exactly does it mean and is it any good for a digital signage system or electronic notice board to use?

Primarily a 4k screen has an incredibly high resolution compared to a standard Full HD screen.

A 4k screen has a resolution of 3840 x 2160 pixels which is the same resolution as four Full HD screens if you put them in a 2×2 configuration (two rows of two).

If you want a big impact video wall, bang for buck it would be cheaper to buy four large Full HD screens as 4k screens are still fairly expensive but you would need to factor in a graphics card that can drive four screens.

4k screens also come in a couple of variants with the later ones being described as HDR screens. HDR simply means high dynamic range.

To understand what dynamic range is we need to look at how that is applied to other things.

If you have ever taken a photograph in very bright sunlight you might have been disappointed that the photo you took was unable to capture detail in the bright and dark areas at the same time.

An HDR mode evolved whereby the camera takes three photographs at once, one exposing for the bright areas, one for the dark areas and the other for something in between.

The three (normally, but it could be more) images are then mixed together to form what’s known as an HDR image that will include detail from both the bright and dark areas.

Music has the same problems.

The difference between very quiet music and very loud music is its dynamic range.

HDR photography isn’t the same as HDR when applied to a TV, which is unfortunate as it’s going to confuse a lot of people.

So switching back to HDR televisions an HDR set (remember, not all 4k TVs are HDR enabled yet) uses 10 bit video instead of the normal 8 bit. These two additional bits give you a huge palette of additional colours so you can get perfectly smooth graduations or colour changes between say black and bright blue.

Looking at something like that on a non HDR screen you might see the colour going up in brightness in small steps.

Is all this overkill for a HDR digital signage display? Probably. A jpg image for example only supports 8 bit colour and as most digital signage screens are viewed from some distance away you probably won’t notice the difference.

However, if you want an HDR display you will have to buy a 4k screen in any case as at the moment 4k or above screens are the only resolution screens that are available with HDR capability.

Another thing to bear in mind with a high dynamic range display is that you should probably watch it in a dark room as the black can only ever be as black as the screen is black when it’s switched off.

And if the whites are much brighter than on normal displays, as is often claimed, you might find the screen a bit too bright to comfortably watch so you might turn the brightness down which has the effect of reducing its dynamic range so you have gained very little!

Regarding HDMI connecting cables, a cheap one may be fine for short lengths but anything longer might require a better quality cable due to the much higher data rate a 4k display uses.

Your PC may well tell you the name of the screen connected but the picture might be black and displaying a no signal message.

This is because the communications between the PC and the EDID chip in the display that sends the display information to the PC uses a much lower data rate than that required for 4k transmission so lower quality cable is fine for that data.