If you have ever struggled to see your mobile phones screen in bright sunshine, then putting a standard LCD screen or TV in a bright place such as a sunny window will result in a signage screen that might as well be switched off! 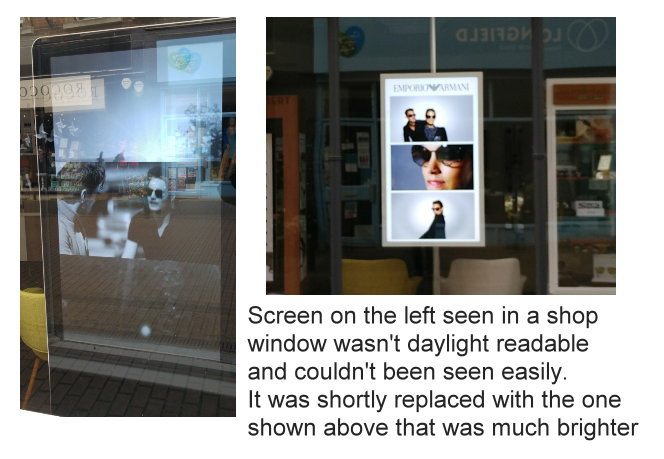 Like most things now, technology comes to the rescue with daylight readable high brightness screens that are the perfect solution if you want to put a screen in a window or outside in say a car park.

Cashpoint ATM machines from a few years ago were a prime example of hard to read screens in the sunshine that have since been fitted with brighter daylight readable screens making them much easier to use in the sun.

Some screens are designed in such a way that they can actually use the sunlight to make the image brighter by reflecting the light back out. These are known as transreflective screens, while other high brightness displays have much brighter backlights along with less reflective front surfaces.

​Obviously you don’t want a really bright screen dazzling people when it’s dark so they often incorporate a built in light sensor that measures the ambient light and makes the screen brighter or dimmer as required, which has the knock on benefit of reduced power consumption.